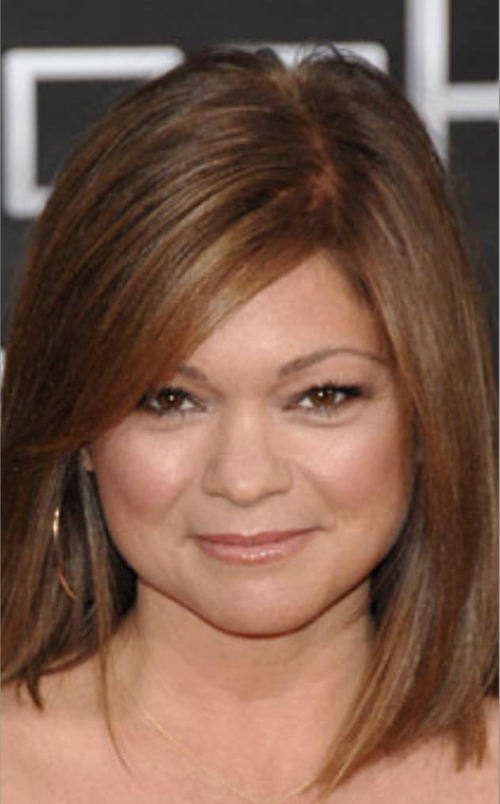 In The Wall Street Journal this week,

I interviewed celebrity chef and actress Valerie Bertinelli for my “House Call” column in the Mansion section (go here). Interestingly, Valerie was painfully shy when little—until she met a classmate in school who was in TV ads. Then she figured that if she was in ads, too, she’d be more popular. The rest fell into place, including TV’s One Day At a Time and Hot in Cleveland, as well as her Emmy-winning cooking show, Valerie’s Home Cooking. [Photo above of Valerie Bertinelli, courtesy of IMDB]

Here’s a reel of Valerie on talk shows. Her years in sitcoms paid off as she gives as good as she gets with Craig Ferguson…

Last week’s photos. If you purchased my books around the world, send a photo and I’ll post over the weekend.

In Stockholm, above, Guy Jones received his copy of my new book and immediately sat down to read it in between ski trips with the kids.

In Utrecht, the Netherlands, above, bassist Hans Mantel stopped playing his upright for a moment to show the love with a thumbs up. Writes Louise Alexandra: “While we were chatting about jazz, I mentioned you, and Hans took out your book, showering it with praise.”

Love to Guy, Hans and Louise. You can join the club here, here and here.

Marc, thanks for sharing the Basin Street Blues clip from Ira Nepus of the Clayton-Hamilton Jazz Orchestra (CHJO). JazzWax readers will enjoy this CHJO performance from the 1991 Monterey Jazz Festival, broadcast on KJAZ shared by Mark Rabin. You find it here.

CD you should know about:

Nick Hempton—Slick (Triple Distilled). Whatever you’re doing this weekend, grab this album and let it play. Newly released, Slick features Nick on saxophones, Peter Bernstein on guitar, Kyle Koehler on Hammond B3 organ and Fukushi Tainaka on drums. Six of the 10 tracks are by Nick, and the quartet smokes all the way through. Prime inspirations are records by Stanley Turrentine, Lou Donaldson and Jimmy Smith. This quartet bounces on the blues, and Nick and Kyle’s interplay on reeds and organ and the exchanges by Peter and Fukushi are terrific. Go here.

In New York next week? Pianist Joe Alterman will be playing at Birdland for five days next week (January 18-22), a first week-long run for Joe. He’ll be with his trio—bassist Nathaniel Schroeder and drummer Marlon Patton—and a special guest, tenor saxophonist Houston Person. Two shows nightly. For more information, go here and choose your date, time and tickets.

Joe’s latest album is The Upside of Down: Live at Birdland. Here’s Joe playing the title track…

Dick Van Dyke doc. Last week, David Van Deusen, editor and publisher of The Walnut Times, the Dick Van Dyke Show newsletter, sent me an email. Last year he completed an authorized, feature-length documentary to celebrate the 60th anniversary of the TV sitcom (1961-1966). The film includes both archival and new interviews with those who were there. By the way, the set you see David in at the start of the film was created in 3D on his computer and placed behind him.

You can watch the documentary for free here…

To read my WSJ “House Call” interviews with Dick Van Dyke and the late Rose Marie, go here and here. For more on the 3D set David created, go here.

Half Baked Ideas by ocp OCP is Operador de Cabine Polivalente, or Multipurpose Cab Operator, or João Ricardo, of Porto, Portugal. Half Baked Ideas is 17 tracks of steady-going broken beats, dub tangents, and ambient jitter. Described in a brief liner note as “experimental locked grooves,” it’s a collection of (mostly) brief tracks in which interstitial compositions are made from downtempo detritus. They range in length, generally, from 54 seconds to a little under four minutes, most in hovering around […]

Music from Cortini himself appears alongside new work by Caterina Barbieri, Robert Aiki Aubrey Lowe and others

This Week in Sound: Rating the Pronunciation

These sound-studies highlights of the week are lightly adapted from the August 8, 2022, issue of the free Disquiet.com weekly email newsletter This Week in Sound: tinyletter.com/disquiet. As always, if you find sonic news of interest, please share it with me, and (except with the most widespread of news items) […]