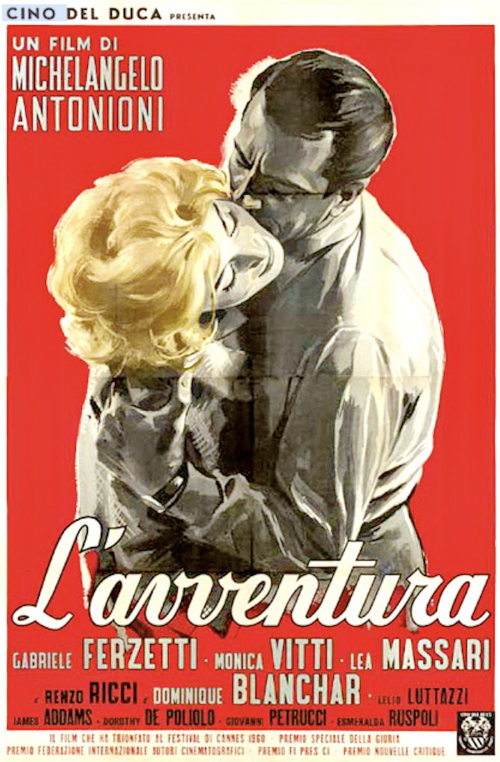 Long chided for its lack of narrative, L’Avventura was awarded the Jury Prize at the 1960 Cannes Film Festival and made Italian actress Monica Vitti an international star. Directed by Michelangelo Antonioni, the film starred Gabriele Ferzetti as Sandro, Vitti as Claudia, Lea Massari as Anna and Dominique Blanchar as Giulia. In short, the film is about the disappearance of a young woman (Massari) during a boating trip in the Mediterranean, and the subsequent search for her by her lover (Gabriele Ferzetti) and her best friend (Vitti).

L’Avventuera has been called everything from the greatest film ever made to the most bewildering. I come down closer to the former. But then again, I had the good fortune of having a terrific Italian cinema professor in college. Before the screening, she said something along these lines: “Don’t let your brain see this film. If you do, it will ruin the experience by struggling to connect dots and find a storyline. You will wind up frustrated and miss the point. Instead, get lost in the film with your eyes. Experience the mood, study the expressions and pay attention to how you feel.” As Sandro says to Anna before her disappearance, “Words are becoming less and less necessary.” [Photo above of Monica Vitti and Gabriele Ferzetti]

If you follow my professor’s advice, you’ll discover the film’s essence—the dreariness of hollow people, the acrid landscape of empty souls, the chronic need to be loved but never knowing what love means, the meaningless lives of the self-centered, the compulsive need to destroy beauty, the symbolism of spilled ink, the suspicions of the aimless, the insomnia of the bored, the symbolism of Jean Harlow, and the ultimate surrender to infidelity and enabling it.

As with Jeanne Moreau, Anouk Aimée and Claudia Cardinale, I could watch Monica Vitti all day long in virtually any film. Her intensity and eternal despair remain potent. As for Antonioni, L’Avventura was the first in a trilogy of mood films that included La Notte (1961), which I screened last year, and L’Eclisse (1962), which I was going to screen this year but skipped doing so when I couldn’t find a high-resolution print. Perhaps next year. [Photo above of Monica Vitti]

After you watch, I urge you to read the Wikipedia entry for L’Avventura, in particular the section on the film’s production. It’s astonishing the film was even completed given the harsh circumstances and conditions the cast and crew faced while shooting on the Aeolian Islands. [Photo above of Monica Vitti and director Michelangelo Antonioni]

Here, then, is L’Avventura (1960), the perfect New Year’s Eve film. Expand the frame to the full size of your computer or television screen… 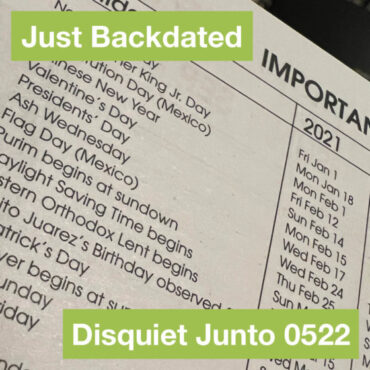 Each Thursday in the Disquiet Junto group, a new compositional challenge is set before the group’s members, who then have just over four days to upload a track in response to the assignment. Membership in the Junto is open: just join and participate. (A SoundCloud account is helpful but not required.) There’s no pressure to do every project. It’s weekly so that you know it’s there, every Thursday through Monday, […]

2024: The year when there will be more voice assistants than humans. 289,000,000: Number of TikTok videos tagged #synesthesia 0.2: The percent less than which it is estimated of which people actually have synesthesia ________ ¹Footnotes Assistants: thesaxon.org. Synesthesia: wired.com.

The two-part 'Would It Sound Just As Bad If You Played It Backwards?' collects music from the archives of the Polish Radio Experimental Studio in Warsaw