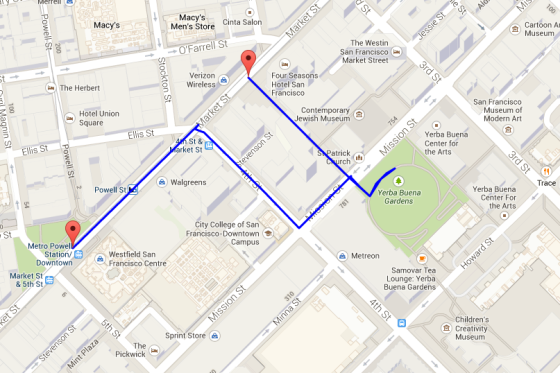 The route shown here comes out at about 2,835 feet. That’s the length, roughly estimated, of a soundwalk I’ve taken my students on most of the semesters I’ve taught a course about sound at a local art school, the Academy of Art University.

A soundwalk can be understood as follows: Ever take a docent tour at a museum? A soundwalk is like that, except the museum is the world, and the art is the sound that surfaces in the world.

I’ve occasionally done this particular soundwalk for private groups. There’s a lot packed in on a stroll that lasts just over half a mile: urban sound, retail sound, public space, private space, Hollywood, silence, acoustics, architecture, noise pollution, urban planning, and much more. Only a few blocks away is Union Square, a central setting for Francis Ford Coppola’s classic 1974 film The Conversation, a great teaching tool about sound in its own right.

On a good day, we’ll have watched the movie in advance, and after the soundwalk we’ll wander over to the plaza to talk about the topics that Coppola, in collaboration with editor and sound designer Walter Murch, explores in the film: surveillance, perception, technology.

I didn’t teach the course in 2021 because Covid-19 impacted the school’s planning. This coming year is up in the air. Who knows what the future will bring, whether post-pandemic or during an extended mid-pandemid? Either way, I have no doubt that aspects of this soundwalk will have changed, in some cases drastically, because the city has changed. At some point I’ll walk this path again, and I’ll see what I hear.

This park serves as the next to last day of the 13-day countdown to the 25th anniversary of Disquiet.com. Read the full post described above: “A San Francisco Soundwalk.”

2024: The year when there will be more voice assistants than humans. 289,000,000: Number of TikTok videos tagged #synesthesia 0.2: The percent less than which it is estimated of which people actually have synesthesia ________ ¹Footnotes Assistants: thesaxon.org. Synesthesia: wired.com.

The two-part 'Would It Sound Just As Bad If You Played It Backwards?' collects music from the archives of the Polish Radio Experimental Studio in Warsaw